The wolf is a large species of predatory mammal which occasionally strays past the Scent Border and into the Mouse Territories.[1]

Bigger than the coyote and the fox, the wolf is specialised for cooperative game hunting. Packs of wolves, ranging between three to seven members, are able to bring down large prey animals such as moose and deer. The wolf is active year-round, but because a pack requires so much food to sustain itself it rarely remains in one place for too long.[1]

The wolf usually leaves mice alone as there are bigger, richer meals to hunt outside the Territories. Inevitably, though, a local wolf pack will fall onto hard times and suffer from a lean year. At this point, the wolf turns to nearly anything that moves to sustain itself.[1]

A young Bastian angers a lone wolf beyond the Scent Border by peppering its nose with thorn arrows. 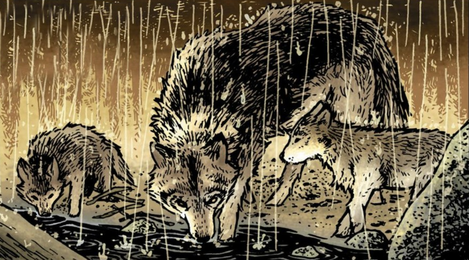 A wolf and her cubs stay near Elmoss during the spring of 1153.

A pack of wolves watch as Midnight is banished beyond the Scent Border at the end of the fall of 1152.

Retrieved from "https://mouseguard.fandom.com/wiki/Wolf?oldid=9335"
Community content is available under CC-BY-SA unless otherwise noted.