The Scent Border is the boundary marking the border of the Mouse Territories. Comprising a long stick fence supplemented in places by a row of low rocks, the Scent Border is not of itself a defensible perimeter. Rather, a repellent mixture which is poured along the boundary itself repels larger animals away from mousekind.[1]

The scientists of Sprucetuck concoct the repellent mixture, and the Mouse Guard repour it at least twice a year. This task is one of the most vital carried out by the Guard, so its execution is placed into the paws of only the most trusted patrols.[1]

Many mice do not even know of the Scent Border's existence, and only a few living mice have ever gone beyond its boundaries.[1]

A pack of wolves watch Midnight banished beyond the Scent Border at the end of the fall of 1152. 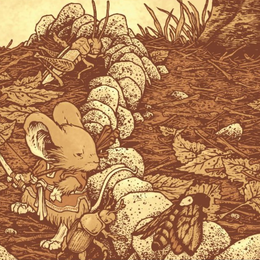 A young Bastian prepares to cross the Scent Border with his insect companions.

Retrieved from "https://mouseguard.fandom.com/wiki/Scent_Border?oldid=8807"
Community content is available under CC-BY-SA unless otherwise noted.