Saxon (1124 – unknown) was a male mouse and a member of the Mouse Guard. He was one of the most accomplished sword-wielders the Guard ever inducted.

Saxon fought in the Weasel War of 1149 and helped the Mouse Guard achieve a hard-won victory. In the fall of 1152, he played a prominent role in resisting the attempted coup d'état by Midnight, a former Guardmouse.

Following Saxon's second return from Darkheather in the winter of 1152, he proposed to the Matriarch Gwendolyn. The pair had a daughter, Grace, in 1155.

Saxon was born in the year 1124, to Gill and Anne of the southern settlement of Flintrust.[1] Saxon developed a passion for fighting at a young age, and was known to carry with him a wooden sword during his childhood.[2]

In 1131, at age seven, Gill took Saxon to the nearby town of Oakgrove to watch a puppet show of The Tale of Baldwin the Brave. This story taught Saxon that skill with a weapon could win a wife and fend off predators.[2]

Early years in the Mouse GuardEdit

Saxon joined the Guard in an unknown year and was mentored by Loukas. He was given a red cloak, which offered little camouflage, but which suited Saxon as he preferred to enter open combat with foes rather than remaining hidden. Saxon soon became one of the greatest sword-wielders the Guard ever trained.[4]

Saxon's experience as a Guardmouse allowed him promotion to the rank of Patrol Leader, but he declined this role, preferring instead to remain as a Patrol Guard under the leadership of his good friend Kenzie.[4]

In 1149, the Mouse Guard entered open war with the weasels of Darkheather. Saxon served on the frontlines during the fighting, and was one of the few mice to ever return from Darkheather alive.[3] At this time he and Kenzie trained Lieam as their tenderpaw, who himself was promoted to the rank of Guardmouse at the conclusion of the fighting.[4]

During the fall of 1152, Gwendolyn tasked Saxon, Kenzie and Lieam with tracking down a merchant who went missing between Rootwallow and Barkstone. After finding only the missing mouse's cart, and with night approaching, the three elected to make camp and continue the search in the morning. Saxon rose early and discovered trail of grain leading away from the cart.[5]

Saxon and Kenzie followed the trail to a large pit in the ground, and were soon joined by Lieam. Before they could investigate the pit, a milk snake ambushed the trio from behind. The Guardmice fled the serpent and hid in a nearby tree hollow — much to Saxon's consternation, who expressed a desire to kill the snake then and there.[5]

Once the serpent seemed to have left the vicinity, the three mice approached the pit again. Saxon spotted snake eggs below, and immediately leapt down and smashed them. Kenzie followed Saxon's lead. In the meantime, the snake returned and attacked Lieam, who slayed it by driving his sword through the roof of its upper jaw. Saxon and Kenzie returned to the forest floor and extricated Lieam from the serpent's maw.[5]

Saxon cut the snake open and discovered the missing merchant's body inside. Kenzie then revealed to Saxon and Lieam that the missing mouse was a traitor: he had found an illegal map of Lockhaven earlier at the grain cart, but had initially hidden this as he feared Saxon would have killed the merchant on site, had they found him alive. The trio resolved to head to Barkstone — the missing mouse's destination — to investigate who he was selling the Mouse Guard's secrets to.[5]

On the road to Barkstone, the Guardmice chanced across Midnight, the Guard's weaponsmith. Lieam began to tell Midnight about the traitorous grain peddler, but was stopped by Kenzie, who later told Lieam and Saxon not to talk openly of the matter until they knew the extent of the apparent plot against Lockhaven.[6]

At Barkstone, the trio split up and went about the city asking questions about the grain peddler. Saxon visited a glassblower and wood carver. This line of questioning soon drew unwanted attention from the town guard, who surrounded the three mice at their rendezvous at the city square.[6]

Kenzie suggested a distraction was necessary, so Saxon announced to the surrounding mice that they were to witness a spectacle a duel between two of the Guard's finest. Saxon and Kenzie duelled, which quickly descended into a brawl between the two mice. Lieam used this distraction to slip away into the gathering crowd, shedding his cloak. The town guard intervened in Saxon and Kenzie's struggle, bound them with ropes, confiscated their weapons and left them unconscious far outside the city gates.[6]

The hermit Celanawe happened across Saxon and Kenzie's unconscious bodies, and brought them back to his hut for interrogation. He trussed the Guardmice up from the ceiling. When the pair came to, Celanawe accused them of stealing his weapon, the Black Axe. After a heated argument, Saxon managed to chew through his bonds and tackled the hermit despite his paws still being tied together. Kenzie then convinced the oldfur that they were not his enemy and had nothing to do with stealing his axe.[7]

In the meantime, however, a fire had broken out in the hut. The three mice escaped the conflagration but the dwelling was beyond saving. Celanawe resolved to accompany the Guardmice back to Lockhaven, to which they agreed — albeit Saxon expressed his disbelief that Celanawe could be the fabled Black Axe.[7]

On the trio's journey to the Mouse Guard stronghold, Kenzie took the others to a hidden weapons cache from which Saxon armed himself with a rusty sword.[8]

The mice arrived at Lockhaven to find it already besieged by Midnight's army, The Axe. The captured Lieam was visible in the throng of the army. For lack of a better plan, Saxon suggested taking on the attackers, slaughtering their leader and rescuing Lieam, but Kenzie reasoned such a plan was suicide. Then Celanawe told the others of a secret passage into Lockhaven which was so old not even the Mouse Guard would know to seal it.[9]

Saxon, Kenzie and Celanawe followed the passage straight to Gwendolyn's office, where Midnight and his mice were confronting Gwendolyn. The trio took Midnight by surprise and, after a brief skirmish, took Midnight captive and slayed the remnants of The Axe. On Gwendolyn's orders, Saxon and Lieam lead the malcontent at swordpoint beyond the Scent Border and banished him from the Mouse Territories, far from the Guard he sought to overthrow.[9]

The winter of 1152 was particularly cold, and a lack of food and medicine made the situation at Lockhaven dire. Gwendolyn sent Saxon, Kenzie, Sadie, Lieam and Celanawe to various settlements[specify?] to source supplies.[10]

The group was en route through the snow to Sprucetuck to request elixer when a great horned owl began hunting the group. Sadie managed to drive the owl away with a well-aimed shot from her sling, blinding its right eye. Saxon expressed disappointed that he missed the opportunity to fight the owl himself.[10]

The group arrived at Sprucetuck and negotiated provision of the necessary medicine. On their return journey to Lockhaven, Saxon tripped on a root causing the ground beneath to subside and he, Kenzie and Sadie were plunged into a tunnel leading into Darkheather. Lieam and Celanawe, separated and with no means to rescue the others from below, decided to return to Lockhaven with the medicine on their own.[11]

Meanwhile, Saxon, Kenzie and Sadie followed the tunnel until they reached a gateway flanked by two weasels. Before Kenzie or Sadie could suggest a plan of attack, Saxon charged forward and struck one of the weasels with his sword, which turned out be just a statue. Saxon's sword was shattered. Kenzie then berated Saxon for acting recklessly, which soon devolved into an argument between the two Guardmice.[11]

The arguing caused a swarm of roosting bats to awaken. Saxon showed prejudice to the bats, angering them into attacking the three mice. Saxon jumped atop of one of the bats, and, holding his broken sword to its neck, attempted to make it fly him to an exit. The bat was unwilling to assist the Guardmouse, so Saxon fatally stabbed it and both mouse and bat plunged far down, landing upon an enormous mound of mouse bones.[12]

Saxon awoke from unconsciousness on the bone mound with Kenzie and Sadie were nowhere to be seen. He found a jar of oil nearby. Saxon fashioned a torch with the oil, a bone and a torn piece of his cloak, which he lit by striking a spark from his broken sword against the stone wall. He set about exploring his grizzly surroundings. Near an alcove, Saxon stumbled upon a skeleton with a sword which he recognised as belonging to his former mentor, Loukas.[3]

When he was finished grieving, Saxon fetched Loukas's sword and cloak pin and continued exploring the tunnels of Darkheather. He reunited with Kenzie and Sadie. Still somewhat moody, he accused the pair of being too busy snuggling to search for him.[13]

The Guardmice then continued following the labyrinthine chambers until they happened across an underground river. Sadie suggested the mice find anything that floats, and so Saxon found a bucket which, whilst wobbly in the water, the three Guardmice used as a vessel in which to explore the channel. Saxon used a compass built into the pommel of Loukas's sword to navigate towards Lockhaven.[13]

In the darkness, Saxon saw the body of Abigail drifting by, littered with Guard arrows. The mice realised they must be close to Lockhaven and wondered what had happened in their absence. Saxon then spotted a broken cistern leading to the well-shaft straight beneath Lockhaven. Some Guardmice hoisted the trio to the surface, and explained Abigail's betrayal and that Lieam and Celanawe had not yet returned.[13]

Kenzie and Saxon rushed to their fellow Guardmouse Isabel, and requested she saddle them some hares upon which they would ride in their search for Lieam and Celanawe. Aided by the hares, the pair soon found the great horned owl that had attacked them before Sprucetuck dead in a snow. Pawprints lead away from the corpse. The Guardmice followed the trail and found Lieam, who was half-frozen and unconscious, and Celanawe, who had been killed from wounds sustained by the owl. The group returned with Celanawe's body to Lockhaven, and Saxon hid the Black Axe from the curious onlookers upon their arrival at the gates.[14]

Saxon attended Celanawe's funeral at the end of the winter of 1152. After the oldfur's cremation Saxon approached Gwendolyn and told her some of what he had been through. The pair shared a kiss.[14]

Life after the winter of 1152Edit

During the spring of 1153, Saxon assisted Sienna to gather honey from the Lockhaven beehives, under the guidance of the apiary keeper.[16]

Later that year, in the summer, Lieam met with Saxon and Kenzie just south of Lockhaven to inform them that Celanawe had named him the new Black Axe. Saxon tried to talk Lieam out of this life of self-imposed exile but he would not budge. At Lieam's request, Saxon returned Lieam's cloak to Gwendolyn and informed her that was all he had found of him.[17]

While Saxon was sometimes quarrelsome with his companions — particularly when situations were dire — he had a fierce sense of loyalty to his friends, to Lockhaven and to Gwendolyn.

Saxon tended to be irrational and reckless at times. Often he was the first to pick a fight with a predator and he was willing to battle even when outnumbered. Kenzie often needed to talk Saxon down from being too combative.

Most of Saxon's fighting skills were taught to him by mentor Loukas and his weapon of choice is a broadsword. He was one of the most accomplished sword-wielders the Guard ever inducted.[4] 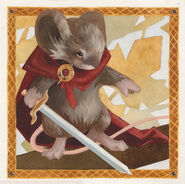 Retrieved from "https://mouseguard.fandom.com/wiki/Saxon?oldid=8680"
Community content is available under CC-BY-SA unless otherwise noted.