"The protector of mice whose names means shield, he stands in the way of a predator's blows. Defending mousekind in wild forest or field, no matter the danger or attack a beast throws."
―Mouse Guard Alphabet Book

Rand is a male mouse and a yellow-cloaked Guardmouse. After receiving a serious wound to his his left knee during the Winter War of 1149, his career as a patrol mouse was unfortunately cut short. This wound kept him at Lockhaven to act as Captain of Lockhaven's defenses while monitoring the comings-and-goings of his fellow Guardmice.[1]

Rand relied on defense as his tactic for staying alive in the wild country. He would exhaust a predator by avoiding its attacks and then give it a fatal slice from the tip of his shield. A number of times he has saved Saxon's life due to his reckless behaviour.

Rand grew up in Shorestone. His father was a member of the Haven Guild. In his youth, he was hesitant to join a specific trade, although after a discussion with his father, who told him The Tale of The Axe Trio, he decided he felt best suited to joining the guard.

In Fall 1152, Rand is studying battle tactics and trying to recover from a severe leg wound (which he sustained from the Weasel War in 1149), when Quiggly alerts him about mouse a approaching the Lockhaven gates. At this time he is unaware of Midnight's betrayal, whom he presumes is still in Windshelm. He orders the gates be opened and allows entry to the mouse, revealed to be Sadie, who warns him the presence of a traitor in the city with a full map of it. Rand immediately orders all entrances to be sealed and all archers to be allocated around the parapets and windows. He finds that the portcullis is still open and Meritt explains that the chain is rusted. Rand commands that the guards barricade the door with anything they can find, then tells Sadie to report to Gwendolyn.

As Rand is helping to defend Lockhaven from the Axe Army and shielding himself from arrows, he refuses to negotiate with Midnight, even as he threatens to kill Lieam. With the Mouse Guard unable to hold the gate any longer, he and Sadie's priority is to protect the Matriarch. Gwendolyn decides to stay and fight by their side. Rand stands his guard as Midnight and his squad enter. As Celanawe bursts in, Rand blocks a lethal blow from the Black Axe and he recognises that the Axe Army's leader is their own blacksmith. One Axe Army fighter manages to open his leg wound. He nurses himself as Midnight is defeated. Despite his injury, he aids in marching the exiled Midnight out of the city.

Abigail bandages Rand's leg, also applying some herbs to them. But his leg is so deeply severed, that he has to walk on a crutch to get around. He orders some guardmice to seal the gates of Lockhaven. Healers have confirmed that he is no longer in condition to patrol, but he continues his duty for the Mouse Guard in the city itself.

The following winter, Rand has caught a fever, so Landra is taking over his duties at the gate office. The ill mouse is trying to recover in Abigail's infirmary. As the healer mouse applies water to his forehead, Gwendolyn finds that he is looking worse than he did before. Abigail tells the matriarch that his leg wound is inflamed and that she does not have the medicine to cure him. She expects he won't last more than one night, but Gwendolyn consoles Rand and reassures him that the Guardmice who went to gather supplies will come back to aid him.

Later that night, Gwendolyn returns to check on Rand, but finds that Abigail is absent. In his gravely ill state, Rand manages to utter "Poison". Gwendolyn finds out that Abigail applied hemlock to his bleeding leg, revealing her to be a traitor. Gwendolyn has Rand taken to the stairs that lead up to her quarters to keep him safely hidden from the treacherous healer. No longer exposed to the poison, he is starting to heal, but is still weakened. He manages to gain strength to attend Celanawe's cremation. 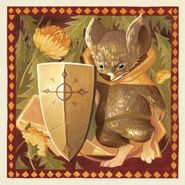 Retrieved from "https://mouseguard.fandom.com/wiki/Rand?oldid=9025"
Community content is available under CC-BY-SA unless otherwise noted.