"In these we claim our independence from the savage world around. Our autonomy, ideals, and pride live here."
―Map of the Territories, 1108

The Mouse Territories is a rough and rocky portion of land locked by landmasses to the east and west. To the north of the Mouse Territories is the North Sea, while to the south-east is what appears to be a patch of small lakes and ponds. The soil is unsuitable for agriculture and is heavily forested and blanketed with thick underbrush.

Situated around the edge of the territories is the Scent Border, while scattered throughout the Territories themselves are various mouse outposts, villages and towns each governed by their own local magistrates and mayors.

What is beyond the Mouse Territories is not commonly shown. According to Kole in Legends of the Guard Volume One, beyond the east borders is wild country, an eastern sea and some forest land inhabited by mice, weasels and snakes.

"This happened in the far east. Past our territory. Past the wild country and over another sea yet."
―Kole, Legends of the Guard Volume One

A Brief History of the Mouse TerritoriesEdit

In the not-too-distant past, mice lived in tiny tree hollows, under logs, in stone cracks and other wayward, forgotten places. They lived scattered across the wild without community or support. They were hunted by predators, subject to harsh weather, and had few supplies to sustain them in the face of calamity. In fact, these mice were far more likely to perish from depredation, exposure, illness or starvation than live a long, prosperous life.

Against the overwhelming forces of nature, a few desparate groups made a stand. They staked a claim on a handful of safe patches of wilderness. As word of these safe havens traveled, other mice flocked to them. The most famous settlement grew quickly from a hiding place to an outpost to a fortification and, finally, to a citadel- fortified walls surrounding a prosperous town, defended by a dedicated guard. This place is now called Lockhaven, and it is the center of what is known as the Mouse Territories.

As Lockhaven became more and more secure, its guardians reached out to other settlements. At first, the Lockhavenites tried to bring everyone they found back to the safety of their city. Many came, but many also would not. Other communities, perhaps less safe but still prosperous, had formed in the wild. They were reluctant to leave what they had begun, despite their precarious position.

There was a debate within the ranks of Lockhaven’s guardians. What to do about these other settlements? Should they be forcibly moved? Should they be abandoned? In the end, the guardians decided there was only one true answer: Lockhaven must use her strength to defend and support these communities. All mice must prosper or all mice will fail. Therefore, these guardians struck out to the distant settlements, marking paths and noting which directions gave them more cover, better viewpoints and quicker routes.

These brave, selfless mice quickly became known as the Mouse Guard. As their numbers grew and their protection was extended and came to be relied upon, the far-flung settlements did indeed prosper. Lockhaven itself changed as well. It became less of a bustling city and more of a central hub for the Guard. Eventually, the Guard took over the administration of the citadel completely.

The first mouse to organize the defense of Lockhaven was female. Thereafter, it has remained tradition that the Guard be commanded by a female mouse given the rank of Matriarch. She is in charge of internal affairs, governing the mice of Lockhaven and setting the Guard's missions and patrols. The Matriarch determines Guard postings, what duties patrols are to complete and which areas in the Territories need the most attention. Beneath her are a cascade of captains and administrators who assist her in day-to-day operations and long term plans.

In the wilds between the settlements, all mice agree, the Mouse Guard is the law. But in the mouse towns, the Guard only has as much authority as that town's government allows. Most settlements welcome Guardmice, but many defer to their own lawmice and protectors. Some places even force visiting Guardmice to turn over their weapons at the gates of their settlement. 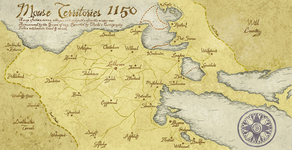 Map of the Mouse Territories, 1154.
Add a photo to this gallery

Retrieved from "https://mouseguard.fandom.com/wiki/Mouse_Territories?oldid=8213"
Community content is available under CC-BY-SA unless otherwise noted.