Mouse Guard: The Black Axe is an all-ages graphic novel by David Petersen and the third volume in the Mouse Guard series.

Set in 1115, The Black Axe is a prequel to Fall 1152 and follows Celanawe, then a young Guardmouse, and his quest to the island of Ildur to retrieve the Black Axe, a legendary weapon, with companions Em of Appleloft and Conrad.

The series spans six issues which were released between October 2010 and January 2013. A hardcover book was released in July 2013, collecting all six issues, a prologue, an epilogue, and other assorted extras.

Around 2007, when Petersen was beginning to draft Winter 1152, he committed to the idea that the third Mouse Guard volume would explore the history of Celanawe and of his finding of the Black Axe.[1]

Petersen originally planned to make this a shorter, four-issue anthology series with each issue documenting a different Celanawe adventure. However, when developing the outline for the series he found that Celenawe's history could be better told as a "quest" narrative. This longer character arc necessitated six issues of material.[1]

By early 2010, Petersen had completed the cover for the first issue, and he finished outlining this issue in April that year.[1]

Archaia published Issue 1 in October 2010. Issues 2 and 3 followed in April and September 2011, respectively, and Issues 4 and 5 in January and August 2012, respectively. The final issue was released in January 2013. As with Fall 1152 and Winter 1152, each issue was accompanied by a pin-up by a guest contributor(s): Alex Sheikman, Sean Rubin, Duncan Fegredo, Charles Paul Wilson III, Shane-Michael Vidaurri and Mike Mignola & Dave Stewart.

Petersen released a collected hardcover in July 2013, collecting all six issues as Chapters One through Six, the 2010 Free Comic Book Day one-shot Spring 1153 as a prologue, a short epilogue, a twenty-two page section of maps, guide pages, and cutaways, and a gallery of the aforementioned pin-ups.[2]

The prologue collects Petersen's first Free Comic Book Day one-shot, Spring 1153, which was originally released on 1 May 2010. It follows an entry in the Matriarch Gwendolyn's journal and the doings of the Mouse Guard across the Mouse Territories. But for the exclusion of the cover, the prologue remains unchanged from the original version.[3]

Writing from her office at Lockhaven in the spring of 1153, six days before day and night are equal, Gwendolyn explains that the mice have experienced dangerous weather for the past eight days. Rivers and streams are overflowing, and she has sent out almost all her Guardmice to rebuild and bring order to the Territories.[3]

Annika and Cedric monitor a pack of wolves near Elmoss, while Gwendolyn narrates that predators are waking and breeding. We see Sela and Cerise protecting some harvesters at Rootwallow, and Gwendolyn wonders as to the fate of Lieam, who has been missing since the end of winter. While concerned for Lieam's fate, Gwendolyn writes that she cannot spare any of her mice to look for him.[3]

We see Ewing and Waldon gathering timber near Whitepine, and Saxon and Sienna assisting the apiary keeper with harvesting honey from the Lockhaven bees. Gwendolyn assures any later Matriarch reading this diary that she wishes for nothing but Lieam's safe return.[3]

Vinson, Elymis and Aeren mark the Scent Border, and Gwendolyn discusses the first seasonal summit between the leaders of the settlements, which is to occur in 10 days time. The leaders are to be escorted by the sons and daughters of their respective settlements who wish to become Guardmice — a "trial by rain" as Gwendolyn terms it.[3]

The Matriarch turns her mind toward the death of Celanawe, while we see Kenzie and Sadie fishing near Lillygrove and Oakgrove. We see Bastian and Delvin battling a rampaging snapping turtle near Grasslake, while Gwendolyn questions the ability to protect the Territories without the Black Axe. Then, Pearse, Erwynn and Feagan fight a badger attacking Dorgift and/or Gilpledge. Gwendolyn reflects briefly on her declaration of war against the Darkheather weasels in 1149.[3]

Finally, we see Isabel leading two hares towards a large, looming cave. The hares bear a cart laden with all the resources we have just seen the Guardmice gathering: berries and honey, and the corpses of the fish, the turtle and the badger. As Gwendolyn writes her parting thought — that the Guard can only placate these troubles until they have a new hero in which to believe — we see a giant bear emerge from the cave and consider the cart: a gift of placation for this largest of predators.[3]

Chapter One collects The Black Axe Issue One, which was first released in October 2010. It follows Celanawe's meeting of Em at Frostic and his discovery of his lineage and connection to the Black Axe.

The chapter opens at Frostic, in the spring of 1115, one moon cycle before the beginning of summer. Celanawe has spent the season constructing a new stone outpost in the shallow waters just off the shore. The Guardmouse's station at the outpost has now come to an end, and he is about to return to Lockhaven.[4]

Celenawe rows a pinecone back to the shore and enters the Frostic dwelling, reminiscing about his training of that season's tenderpaws. (One such tenderpaw, Loukas, is about to take over Celanawe's station at Frostic.) Celanawe exits the dwelling, pipe lit and fastening his travelling gear. He is intending to begin the three day journey to Lockhaven.[4]

However, Celanawe's departure from Frostic is interrupted by the arrival of an elder mouse, Em of Appleloft, landing on the beach on the back of a crow. Celanawe remains hidden in the grasses at first, watching from a distance as Em dismounts, unsure whether she is friend or foe. What is more, he detects the scent of predators on the air. Em begins calling out towards the Frostic outpost, and Celanawe, sensing danger, abandons his cover and motions for Em to be silent.[4]

Celanawe attempts to lead Em back to the cover of the grasses, but she refuses to budge until Celanawe hears her out. She announces that she and Celanawe are kin, and that she has travelled from Appleloft, by way of Lockhaven, to speak with him. Celanawe interrupts Em, once more telling her to be quiet — for they are now being hunted.[4]

Em's crow, also sensing the danger, begins to shriek loudly back at the beach. The pair turn back to see see the crow being set upon by four fishers. Em sheds tears as the mustelids begin eating the crow alive, understanding each final word it screams. While the fishers are distracted with their kill, Celanawe and Em back away slowly and slip into the woods behind Frostic.[4]

One of the fishers catches the scent of mice, and peels away from the group to pursue the duo. Em and Celanawe barely evade detection by hiding under the roots of a gnarled tree; and the fisher rejoins its group — which by this stage is fighting internally over the spoils of a hunted squirrel. But Celanawe, aware the fishers will not be occupied for long, pulls Em away and doubles back towards the ocean, hoping to lose the predators in the deep waters.[4]

The mice approach the water's edge and peruse the fallen leaves, hoping to find something waterproof enough to carry them across the water. Finding all the leaves to be rotten, Em instead casts her voice towards the water and quacks loudly, summoning a female duck to provide them passage. The pair jump atop the duck just as the fishers arrive on the scene, and the bird takes flight and soars away, narrowly avoiding the throwing spear of one of the fishers.[4]

The duck lands in the deep waters, out of the reach of the fishers, and the mice converse. Celanawe expresses his surprise that Em can talk to birds, and she explains that it can be learned over the course of many years of practice. The elder mouse then informs him she has authorisation from the Matriarch of the Mouse Guard, Bronwyn, to have Celanawe accompany her on a quest across the Northern Sea. Celanawe protests at first, but Em provides him with a sealed copy of a letter from Bronwyn, telling him to treat Em's words "like that of a Matriarch". Celanawe bows to Em.[4]

Em then explains to Celanawe the purpose of their journey. The mice are kin, and have a bloodline oath to fulfill across the sea — retrieving the legendary Black Axe. Celenawe then tells Em to direct the duck south towards the nearby settlement of Port Sumac, where they might find a craft worthy of their intended journey.[4]

Celanawe goes a three day journey to Shorestone looking for the Haven Guild. He is directed to the archivist Arkin. Insisting that the Black Axe's existence be kept a secret, Arkin escorts Celanawe to concealed chamber, which contains the whole history of the legendary weapon. Celanawe breaks the bad news that Benn and Em are dead, making him the last surviving member of the Farrer family.[5]

After Arkin tells Celanawe about some of his past and dealings with his family, he urges him to find a suitable bearer of the axe, one who is willing to sacrifice much. Celanawe states that he needs time to find a suitable candidate. As he leaves, he considers certain tenderpaws to take the title of Black Axe including Loukas, Odell, Fabron and Orianna, then ultimately decides that Conrad is the one for the axe.[5]

When he arrives at the upper ledge of Port Sumac, he finds Conrad in a heavily inebriated. It turns out that Conrad lost his ship, no one believed his story about his voyage with Celanawe and Em and Roarke has placed a price on his head, should he try to sail out. Since then he has been stuck doing harvest work and trying to drown his sorrows.[5]

As Celanawe tries to bring some sense into Conrad, the drunken mouse grows angry and blames his friend for everything he lost. The scene attracts the attention of patrons inside. Seeing that Celanawe does not have the Black Axe with him, he decides to throw punches on him. Celanawe realises that Conrad is not worthy of the title and feigns falling off a cliff to fake his death and take upon the Black Axe to help mice where needed.[5]

In Summer 1153, south of Lockhaven. The current bearer of the Black Axe, Lieam has just finished reading Celanawe's autobiography to Saxon and Kenzie to make it clear why he must retain his secrecy and disappearance. He gives his two friends the remains of his guard cloak to convince the Guardmice that he is no longer alive. The Lieam leaves his friends to continue Celanawe's noble work.[5] 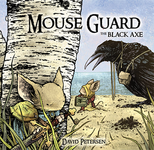 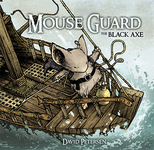 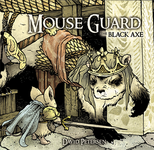 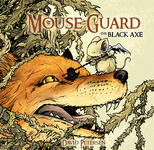 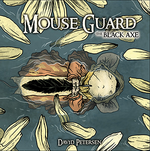 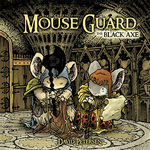 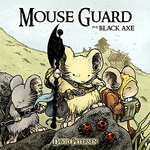 Retrieved from "https://mouseguard.fandom.com/wiki/Mouse_Guard:_The_Black_Axe?oldid=9190"
Community content is available under CC-BY-SA unless otherwise noted.