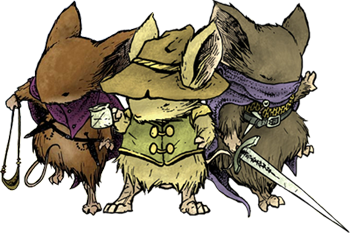 Mice are an intelligent species of animal that possess culture, language and technology. They are constantly under threat from all manner of predators, and therefore choose to build their settlements hidden among secluded areas, such as densely covered forest or rocky outcrops.

The Mouse Territories are a large portion of land, in which dozens of mice settlements and villages are housed. The Territories are defended by the courageous Mouse Guard, a group of elite soldiers, rangers and escorts who patrol the wilderness between each settlement and guard against all danger. Common mouse society depends on the Guard for it to truly thrive.

Generally, common mice choose to work as laborers, artisans or scribes; though some settlements' governments allow ordinary citizens to run for higher-up positions, such as magistrates and mayors. Occupations are often passed down through generations of family, and therefore it is not uncommon for one to find an entire lineage dedicated to their family's chosen profession.

Retrieved from "https://mouseguard.fandom.com/wiki/Mice?oldid=8027"
Community content is available under CC-BY-SA unless otherwise noted.