Lieam is a male mouse and a member of the Guard. After the tragic events of the Winter of 1152, Celanawe (the last in the line of Farrer) bestowed upon him the Black Axe- the title and the weapon.

Lieam joined the Guard in the Winter of 1149 during the war with the Weasels. Just growing into his own, Lieam was thrust into the exciting and dangerous life of being a Mouse Guard.

Lieam is a "Red Fur" as other mice call him. So far, there have been very few other red furs depicted. One of them is Wyatt.

Lieam accompanied Saxon and Kenzie in search of a lost merchant mouse. He climbs a tree for a better view and spots the merchant's overturned cart. As the sun sets, the three guardmice make camp, Lieam taking the first watch.

The next morning he finds his two companions examining the area, when they are ambushed by a snake. The mice retreat until the snake is gone. But as Lieam keeps watch, he finds a piece of the merchant's hat and the snake looms over him. As the snake lunges at him, Lieam thrusts his heavy dagger right through the roof of the beast's mouth, killing it.

Kenzie and Saxon retrieve Lieam from the dead snake and proceed to cut it open, finding the dead merchant. Lieam is concerned about the merchant's wife until Kenzie reveals that he was a traitor. On the way to Barkstone, Kenzie stops him telling too much to Midnight who is passing by, then urges him to be discreet.

Once in Barkstone, the trio of guardmice investigate. Lieam buys a piece of apple from a fruit merchant. However their presence is attracting the attention of the Axe army. While Saxon and Kenzie create a diversion, Lieam slips away. He discards his weapon and cloak and enters Clarkes Cartography to gain some intel. Clarke assumes he's a candidate member of the Axe army and leads him to a sleeper cell, where is he suited up with black armour.

Lieam marches with the Axe army platoon who are going to join the main force and attack Lockhaven to overthrow the Mouse Guard. He notices the grain merchant's grave. He removes his armour and spear, and fights a couple of Axe Army soldiers, but is overpowered and taken to their leader Midnight who recognises him. He gives Lieam one chance to join them, but the redfur refuses.

Midnight orders that Lieam be bound. The Axe Army drag him all the way to Lockhaven all the while taunting him with threats of death. At one point he tells him the Mouse Guard is useless and inefficient, then tells him about how learned of the Black Axe's existence and how he took it from Celanawe. As the siege of Lockhaven begins, Midnight presents Lieam before the Guardmice as a bribe for Gwendolyn. When that doesn't work, he is kept to be executed in front of the Matriarch.

A group of Axe Army soldiers drag Lieam past the gates. As the portcullis closes on to two Axe Army mice, Lieam manages to give his captors the slip. He stumbles to the armoury, cuts his bonds with a sword blade then gears up with a longsword and a small dagger. Near the Matriarch's office he is faced by four Axe Army soldiers. He uses his weapons to deflect flying arrows, then throws the dagger in the heart of one enemy, then kills the remaining three single handedly.

Lieam runs into the Matriach's office and joins battle against Midnight's remaining squad members. After Midnight is defeated, he accompanies his friends holding the traitor at swordpoint, marching him beyond the scent borders.

During Winter 1152, Lieam climbs a tree to get a better view as his companions Kenzie, Saxon, Sadie and Celanawe travel across the Mouse Territories in the middle of a snowstorm to gain much needed supplies. Their last stop is Sprucetuck. After collecting two bottle of elixir, the guardmice start their journey back to Lockhaven. While Saxon and Sadie follow Kenzie, Lieam follows Celanawe. They are soon watched by a Great horned owl, but Sadie blinds it in one eye.

Kenzie, Sadie and Saxon are separated from the group as they fall down a pit into a Darkheather tunnel. Lieam and Celanawe are forced to continue without them as the oldfur reminds the redfur that delivering the elixir is top priority and teaching him a valuable lesson about being himself.

While crossing a stream, Lieam manages to fall into the freezing water. Celanawe helps him get warm by a campfire and dry his soaked cloak. The oldfur thinks that Lieam makes a promising apprentice. With a freezing storm falling heavily on the two, they take shelter by digging a hole in the snow. Celanawe talks a bit about Midnight's motives for stealing the Black Axe and self-proclaiming the title as well as his role during the Weasel War.

The One-Eyed Owl manages to find the hole they are hiding in and grabs Celanawe in one of its talons. It snatches the oldfur by his shoulder plate in its beak, before the mouse knocks its beak with the Black Axe. Celanawe though fluent in owl-speak is not able to negotiate with the aggressive bird of prey.

The owl makes another charge at Celanawe, who drives his axe in its left talon. He tells Lieam to run and get the medicine to Lockhaven. Before Celanawe can land a lethal blow on the owl it gets up and clutches him in its bleeding talon and slowly crushing him. Lieam grabs the owl by its tail feather. While the owl takes flight, the redfur climbs up its back and stabs the back of its head. Lieam tumbles off is caught by a tree branch, then lands on the ground.

The owl is weakened but still not defeated as is the case for Celanawe, who retrieves his axe and tries once more to talk to the owl. It simply crushes the oldfur in its beak. Furious, Lieam charges and strikes the owl beneath the beak and then its leg. He runs for the Black Axe and uses it to finally kill the owl with a blow to the forehead.

Lieam manages to have a final word with the dying oldfur who gives him the title the Black Axe and entrusts him to bear his weapon and title from now on. Lieam tries to make his own way carrying Celanawe's body and an owl feather. He eventually collapses from the heavy weight, breaking his right arm. He is soon rescued by Saxon and Kenzie, returning him and Celanawe to Lockhaven. Grief-stricken, Lieam wishes not to talk with the other guardmice. Lieam attends Celanawe's cremation, a sling around his broken arm, silent throughout the procession.

At some time during the winter, Lieam suddenly disappeared from Lockhaven. By Spring 1153, he was still missing and Gwendolyn was not able to spare a single Mouse Guard to look for him. She instructed the Guardmice acquainted with him to inquire with towns, all the while staying focused on their main tasks to protect the Mouse Territories. The matriarch felt guilty about not being able to find Lieam and suspected that Kenzie and Saxon seemed to know more than they were telling.

By Summer 1153, Lieam summoned Kenzie and Saxon to a large pine tree south of Lockhaven. He read to them the full story of Celanawe's quest for the Black Axe and the title he took to wield that weapon. He then entrusted them to keep their meeting and his presence secret from other mice, so that he may carry out the work of the Black Axe. He left them his Guard Mouse cloak, instructing them to tell the matriarch that this was all the found of him. Lieam then departed to continue his noble work. 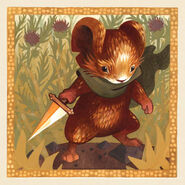 "Lieam" Paper craft
Add a photo to this gallery

Retrieved from "https://mouseguard.fandom.com/wiki/Lieam?oldid=9225"
Community content is available under CC-BY-SA unless otherwise noted.