The June Alley Inn is a mouse tavern located in the western city of Barkstone, not far from the Main Gates. It is run by the mouse June and her husband Alley. It is frequented by a number of mice, who like to order food and drinks, play games of Swords and Strongholds and rent rooms.

The inn consists of three floors including the cellar, the main floor and the upper floor. In Legends of the Guard Volume Three, there are maps of both the main and upper floors. Some of the walls are adorned with pictures of legendary mice. The cellar is where Alistair does his printing works, although June would rather use it for storage.

The main floor consists of the tavern, the kitchen, the counter area, the back access behind the bar and the stairs to the upper floor. Up to twenty mice can be seated in the tavern. The kitchen has two doors.

During the Fall of 1152, the Guardmice Kenzie, Saxon, and Lieam traveled to the western city of Barkstone to investigate the origins of the Map of Lockhaven. While there, they paid a visit to the Inn to make inquiries and have some refreshments.

During the Fall of 1154, the innkeeper June started a story telling competition: "Weave the best tale for my ears, and your past bills are cleared." She then made that competition a tradition the following Spring and Winter. 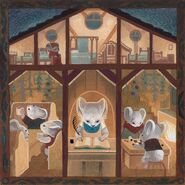 Retrieved from "https://mouseguard.fandom.com/wiki/June_Alley_Inn?oldid=8988"
Community content is available under CC-BY-SA unless otherwise noted.