Start a Wiki
---Legends of the Guard Volume Two

June is a friendly female mouse and the owner of the June Alley Inn in Barkstone: known for being the most hospitable inn in the western end of the Mouse Territories.

June is a very hardworking mouse. She is relatively stern, and expects the patrons of her inn to follow her rules. As of the Fall of 1154, her tavern has been more popular due of her regular storytelling competitions where the lucky patron with the best yarn had their past tab forgiven to them. She is married to Alley, an ink-presser also living in Barkstone.

June is a raw-umber brown-furred mouse. She wears a white vest, a blue criss-cross patterned top garment with a long white skirt. Often she wears a white apron over her clothes.

During the of Fall 1152, the guardmice Kenzie, Saxon and Lieam entered June's Inn to inquire about the mysterious Axe Army. During their investigation, June served them some drinks, and the Guardmice left shortly after.

"Three rules: tell no complete truths, no complete falsehoods, and tell me a tale I never heard."
―June

During the Fall of 1154, June became angry with the patrons of her Inn for not paying their debts. She quickly solved the problem by starting a story-telling competition with only three rules: tell no complete truths, no complete falsehoods, and a tale that has never been told in the inn before.

After the evening of tales had concluded, June named Bowen as the victor, and struck his past debts. She then told the other patrons that she was to hold a competition every year as a June Alley Inn tradition. 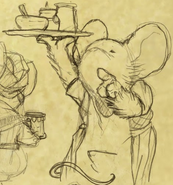 Sketch
Add a photo to this gallery

Retrieved from "https://mouseguard.fandom.com/wiki/June?oldid=9007"
Community content is available under CC-BY-SA unless otherwise noted.