Foxes are a species of animal present in the Territories.[1]

Foxes are smaller than coyotes and wolves and tend to live by their wits. Solitary creatures, except when seeking mates or rearing pups, foxes are very dangerous to small creatures, such as mice. Mice are, in fact, part of their preferred diet. Foxes enjoy hunting and playing with them as much as they enjoy eating them.

The Scent Border keeps out most of these predators, but they are fast learners and a few figure out the trick every season. These wayward predators must be dealt with by the Guard.

In Summer 1115 ("The Black Axe" - Chapter 4), on the isle of Ildur, Celanawe is sent by the ferret clan of King Luthebon to slaughter a fox that has killed his son Aronebon. Aided by Conrad, Celanawe uses the Black Axe to wound it. Celanawe lures the beast into a tangle of briar and kills it with a blow to the forehead, then proceeds to extract an eyeball as proof of its demise. Later the two mice discover two grown fox kits and realize that the fox they killed was their mother. Celanawe feels pity for them and bids them farewell before leaving to deliver the proof to Luthebon.

In first issue of "Legends of the Guard Volume One", the mouse Nigel tells a tale of a Fox and his clan of mice. The Fox sends his best figher Silfano to defeat the Hawk's champion Faulknir. However both mouse clans turned against their masters and the Fox fearing for his life ran away. In the third issue, the mouse Fyffe tells a tale of a mouse adopted by a childless fox couple and grows up thinking he is fox. He boldly approaches a predating fox and tricks him into getting caught by a falcon.

In "Legends of the Guard Volume Two", the mouse Mira tells a tale of a vixen who tried to eat her husband, but was saved by a falcon. Next Orwin tells a tale, where Lily and Pearl are attacked by a fox accompanied by a weasel, but manage to outwit them. 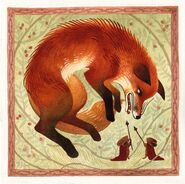 Retrieved from "https://mouseguard.fandom.com/wiki/Foxes?oldid=8849"
Community content is available under CC-BY-SA unless otherwise noted.