Em, known as Em of Appleloft, was a female mouse and a descendent of Farrer.

Em was versed in the languages of an all manner of beasts, and generally preferred the company of birds to that of mice. She spent much of her life at her home at Appleloft studying her genealogy.

During the spring of 1115, Em sailed across the Northern Sea to Ildur with Celanawe, the only other living descendant of Farrer at that time, and the sailor Conrad in search of the Black Axe. At Ildur Hall the ferret healer Eberochre killed Em while Celanawe was away questing on King Luthebon's behalf.

Prior to the spring of 1115Edit

In the spring of 1115, Em's genealogical studies led her to discover that the Guardmouse Celanawe was the only other living descendent of Farrer. That season she set out for Lockhaven on the back of a crow friend to search for and inform him it was his responsibility to track down and recover the Black Axe.[1]

At Lockhaven, Em learned from the Matriarch Bronwyn that Celanawe had been posted alone at the north-eastern outpost of Frostic. It is surmised that Em informed Bronwyn to some extent of Celanawe's lineage and connection with the Black Axe, because she prepared a letter for the Guardmouse relieving him of his duties and stating that Em had a greater need of Celanawe than the Guard could offer.[1]

Em then flew to Frostic, landing on the beach near the outpost. She left the crow in the sand and entered the grasses nearby, calling the Guardmouse's name. Celanawe emerged from behind a nearby tree, imploring Em to be quiet: for he sensed they were being hunted. A brief conversation ensured during which the alert Guardmouse tried to extricate the pair from the incoming danger, all the while denying he was Celanawe; but Em, perhaps seeing the family resemblance, was not fooled. She forbade Celanawe from going any further until she had informed him of his quest.[1]

In the meantime the crow had begun to squawk, and by parting the grasses behind them the two mice beheld a group of fishers attack and kill the crow with their teeth and crude weapons. Em sobbed while the crow died, for in its final shrieks it blamed her for its death for having left it in the open, defenceless.[1]

Recognising imminent danger, Celanawe led Em from the beach and into the nearby forest. They were pursued by a single fisher, but managed to lose it in the trees. The pair watched the predator reunite with two of its brethren and then kill and eat a squirrel nearby. Em and Celanawe retreated in the other direction and made for the nearby sea, hoping to lose the hunters in the water. A fourth fisher ambushed the mice, but Em was able to communicate with a nearby duck and the pair narrowly avoided death by mounting its back as it flew away, leaving the hunters behind in the shallow water.[1]

The duck flew the mice to a safe distance before landing in the water. Celanawe expressed suprise at Em's ability to communicate with birds, and Em informed him how she had learned the languages of other species by years of practice and listening. Em showed Celanawe Bronwyn's letter, and upon seeing the Matriach's seal the loyal Guardmouse informed Em he was at her service. It was then that Em told Celanawe of their mission: to travel across the Northern Sea to retrieve the Black Axe.[1]

At Celanawe's suggestion, Em directed the duck to carry the mice to Port Sumac, where they might find a vessel and sailor worthy for their long sea journey. At the settlement the pair entered the Mariner's Bell Tavern, and Em instructed Celanawe not to mention the Black Axe nor the purpose of their quest when bartering passage.[3]

Inside the tavern the pair witnessed an argument developing between a young mouse, Conrad, and an older one, Rourke. It seemed Conrad's father, who had previously held the position of Captain's Captain, had recently died. Conrad believed that title comprised part of his inheritance. Rourke argued that title belonged to him now and told Conrad he was lucky he was allowing the younger mouse to keep his father's ship, the Red Snapper.[3]

The argument quickly escalated, and soon Em witnessed Conrad pointing his harpoon into Rourke's face. But the older mouse was unfazed: for his gang of sailor mice had also drawn their swords and surrounded Conrad. At this point, Celanawe interceded, and, sensing Conrad's keen sense of pride, goaded the young mouse into sailing he and Em to foreign soil in order to prove his worth. Celanawe's ploy worked and Conrad and Rourke made a blood-pact: Rourke would surrender to Conrad the title of Captain's Captain if he journeyed with Em and Celanawe across the Northern Sea and returned with proof.[3]

Journey across the Northern SeaEdit

The next morning Em purchased supplies for the expedition which Celanawe and Conrad loaded onto the Red Snapper. As the ship disembarked from Port Sumac, at Celanawe's request Em charmed a dragonfly, attached to its a return letter for Bronwyn and instructed it to fly to Lockhaven.[3]

The three mice spent 56 days headed north through the Northern Sea. During the journey Em took detailed notes of constellations which she used to approximate their position. Although Celanawe attempted many times to question Em about their quest and the Black Axe, she was wary of saying anything in front of Conrad.[3]

Finally, on the night of their thirty-second day at sea, Conrad had passed out from the last of his spirits and Em had the chance to explain to Celanawe some of the Black Axe's history. Em explained to Celanawe of the Black Axe's creation by Farrer, its passing to a Guardmouse of Lockhaven, and of how by Farrer's remarriage she and Celanawe were his last living descendants. She described how the Black Axe since its forging in c. 915 it had been secretly handed from wielder to wielder, until 1086 when it went missing. Em's investigations with the beasts of the land revealed the last known mouse to make contact with it was her brother Benn, on an island far to the north of the Northern Sea. Em's plan was to start their search by reaching that island.[3]

The night of the Red Snapper's fifty-sixth day at sea was marked by a ferocious storm. The vessel was torn asunder and Em was knocked unconscious under heavy waves.[3]

Em awoke face down in the sand of an unknown beach. Celanawe, who had come to before Em, stood over her and shook her awake. Unbeknown to the mice, they had washed up on the shores of the Island of Ildur, the land which they had set out to find. Em's book, which was made from birch paper, had also survived the storm, but Conrad was nowhere to be seen.[2]

The pair explored their vicinity. Within a rocky outcrop to the east, they came across the corpse of Em's elder brother, Benn. Em mourned Benn's passing, which attracted a flock of crows. The crows informed Em that Ben had arrived on these shores 20 seasons earlier, and the creature that slew him marched to the "hall on the hill".[2]

Em and Celanawe followed the crows' directions and walked uphill towards the hall which the birds had described. Arriving at the front gates, they were suprised at the large scale of the architecture. Celanawe reasoned that it must be occupied by creatures far larger than mice. So the mice simply slipped under the door. Inside, the stench of ferrets hit them.[2]

King Luthebon, king of the ferrets of Ildur, greeted Em and Celanawe from his throne at the other end of the Hall. He informed them he and his subjects had just eaten, and therefore would not eat the mice right away. The ferret informed them they had arrived on the Island of Ildur, a place where mice had been eradicated. He questioned why they had come. Em informed the King of the words the crows had said.[2]

King Luthebon told the mice that in c. 1110 his hunters had brought him word from the beasts of the land that a "creature" had arrived on Ildur's shores, seeking to conquer it for his own. He laughed as he recalled his creature came to Ildur Hall and turned out only to be a mouse. Drawing the Black Axe from a satchel at his waist, King Luthebon informed Em and Celanawe of the mouse's name: Merek.[2]

Celanawe bowed and apologised for Merek's actions, and implored the ferret to return the fabled weapon to mouse paws. But the King refused. He reasoned the Axe was an important symbol of what happened to those who sought to usurp his rule. And so Celanawe instead offered his services for the weapons; but again he was refused.[2]

At that moment, two ferret hunters, Kiethazel and Garthazel arrived at the hall, bearing the corpse of one of their comrades: the King's son, Aronebon. King Luthebon despaired as he learned the three had been ambused by a vicious fox which lived in the briars near where the ferrets drew their water.[2]

Celanawe offered to kill the beast in exchange for the Black Axe, and while the King initially refused, Celanawe convinced him it would be no loss to him should the mouse perish during the task. Em reasoned that Celanawe needed the Black Axe to kill the fox, and King Luthebon laughed, believing this to be a ploy by which the mice would steal the Black Axe and then leave Ildur, never fulfilling their side of the baragain. But Em suggested that she would stay while Celanawe carried out the task, to ensure there would be no betrayal. Celanawe eventually accepted this compromise, and marched from the hall towards the fox's den, leaving Em alone with the ferrets at Ildur Hall.[2]

According to King Luthebon, While Celanawe was gone from the hall, the King ordered his ferrets not to touch Em. But the healer Eberochre ignored this command as he coveted Em as a live mouse specimen for study. He picked her up roughly and broke her tiny frame. While King Luthebon executed Eberochre for his disobedience, this came too late: for Em had died in the process.[4]

Filled with remorse upon Celanawe's return, King Luthebon granted Em a traditional funeral. Celanawe, Conrad (who had turned up during Celanawe's fulfilment of his task for the King) and the ferrets of Ildur laid Em to rest in the waters at the inland stream Bellisflod. Celanawe placed a feather in her paws, a symbol of her close friendship with feathered creatures.[4]

"Though not a Guardmouse, I gathered she could have been, in her day"
―Celanawe reflects upon his first impressions upon seeing Em in 1115.[1]

Em was a solitary, intellegent and brave. During the 40 seasons prior to 1115, she lived alone at Appleloft and associated predominantly with the creatures of the land such as birds. She enjoyed this quiet life to the bustling life inside any mouse city or town.[5] She exhibited both courage and stubbornness during her quest for the Black Axe with Celanawe, particularly when she insisted she remain at Ildur Hall as a hostage whilst Celanawe quested on King Luthebon's behalf.

Em communicating with a deer while trying to learn the location of the Black Axe. 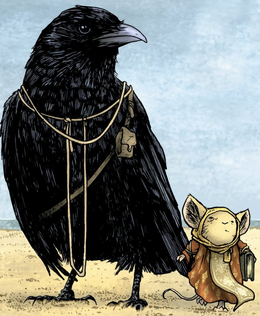 Em disembarks from her crow friend during the spring of 1115.

Retrieved from "https://mouseguard.fandom.com/wiki/Em?oldid=8875"
Community content is available under CC-BY-SA unless otherwise noted.